How to position your sofas 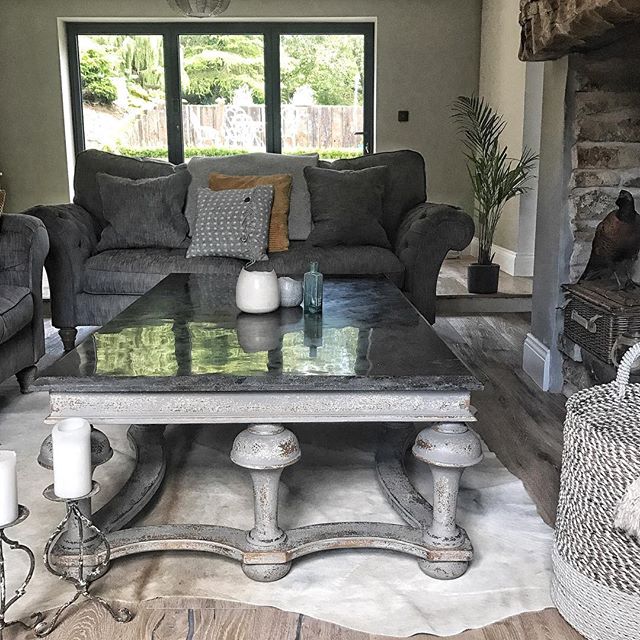 We had an absolute nightmare agreeing on the position of our sofas. From spraying the sizes onto the floor of an old barn, right up until their delivery, we just couldn’t agree.

I actually hate the idea of a room being set out around the position of the TV. It just feels so wrong in a family house, albeit that it’s the most practical way to position a living room.

I have a thing (some might call it an obsession) with symmetry, whereas my other half is totally practical. I did however, and ALWAYS will, draw the line at the TV going on the fireplace. Don’t get me wrong there’s a time and a place for this (modern apartment perhaps with clever built in mechanisms. But it definitely was not going to happen above our exposed stone fireplace in the old barn.

The debate went on and on… could we duel site the AV points and all electrical in order to have options. The sofas opposite each other in front of the fireplace (my preference) for social occasions and spin them back into an L shape consider the TV on a day to day basis?

Hubby was having non of it. And as he was running the build I ended up having to compromise. (Apparently we only had enough aerial outlets in the loft for one set but whether I’ll ever believe that is another thing completely!).

I’d definitely recommend, if you can compromise on TV position, or especially if you have the luxury of a second sitting room where a TV is secondary, position the sofas opposite each other. Two the same size will always look the most balanced. And if space is on your side an accent chair to complement makes a beautiful addition, hey, why not go all the way and add in a foot stool to match?

Choose a statement coffee table as a focal point – put something strong on it, neatly stacked magazines, noteworthy books, candles and flowers, it will finish it off beautifully.

Ref those TVs on chimney breasts. Pleeeaaassse only if you really really must. And think it through, surface mounted cables look bloody awful so the TV would have been better off somewhere else.

On that point, when you’re planning your room layout, think about where the TV will be sitting in comparison to the windows, where will the sunlight hit? You don’t really want the full glare of the morning sunshine hitting the tv if you’re a huge fan of Holly and Phil. Position it too high and you’ll get neck ache staring up at it (another chimney breast faux pas).

So we ended up with an L shape layout (two sofas the same size in case we do ever turn them around), fireplace taking centre stage and the TV placed in the corner. It was a styling compromise, but do you know what? Practically (and most annoyingly) it works really well. But of course – that doesn’t mean I’m saying hubby was right.